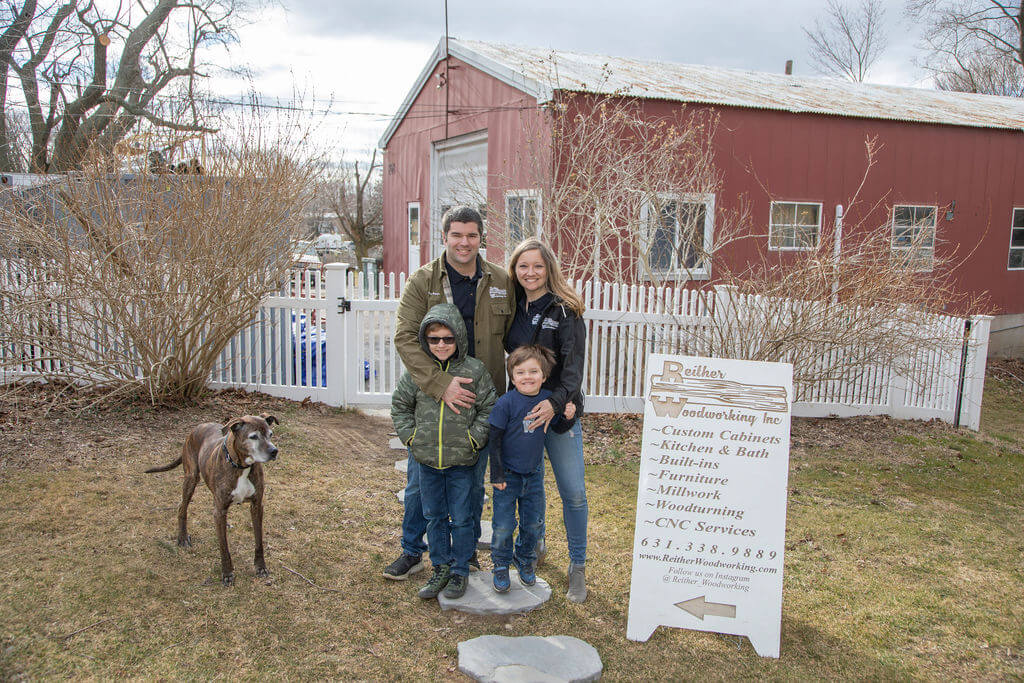 Growing up in Aquebogue, Bruce Reither worked with his carpenter father on job sites to make some side money. He describes his father as a simple guy who had not done much in terms of business.

When Reither was 18 and still in high school, his father died suddenly from a brain aneurysm.

“He left us with a truck full of tools,” Reither recalls. “As we were trying to scramble to figure out what to do, I just basically did side work and figured things out.”

He considered dropping out of high school, but a flexible senior schedule allowed him to leave early, using “my dad’s beat-up van” to go make money. He soon found he had a penchant for finish-end carpentry. “I thought it would be a good idea to go to BOCES to learn carpentry the right way,” he says of his post-graduation plans, though, as a mature 19-year-old in class with a bunch of teens, it was short-lived.

Instead, he went on a mission to teach himself.

“I took on a lot of projects that I probably had no business taking on and started loving the craft of carpentry and trim carpentry,” he says, reflecting on his start nearly 20 years ago. He read a lot of books on subjects like old-style woodworking and joinery and Japanese woodworking. “I would pick up things along the way. It was a lot of just trying to figure it out as I went.”

Reither got married young, at just 20, and he credits his supportive wife, Kim, for the patience she had as he set up tools in their living room so he could experiment with new skills.

“I love the craft and she was super helpful,” he says. “I ate it up. In my early 20s, I wanted to learn every way to do it — by hand, by machine. As I made money, I would purchase the next type of machine to help me to expedite the process without doing it by hand.”

Eventually, he saved up enough money to build a garage in the backyard of his family’s property, which he had now taken over.

While he started as a subcontractor, much like his father, he quickly built a momentum for his own business. He built a client base, in which he always tries to give the client something special, he says, such as carving their names into the drawers.

“Our bread and butter is cabinetry,” he explains, but there is plenty else going on in the shop. “Right now, we have a big giant 16- foot oak table we’re building.”  There are window and doors, sinks he’s carved out of wood, and carved vases.

“Whatever the client wants. Anything they can dream up and I try to add some twists,” Reither says. “I don’t claim to have a particular style,” he adds, but there is no denying he brings a keen eye for detail and a lot of heart to his projects.

Asked what kind of wood working job he likes taking on, Reither says, “I like any kind of interesting wood. We’ve done some pretty wild, different type of exotics.”

In his 20s, before he and his wife had their two children, they traveled quite a bit doing missionary work as Jehovah’s Witnesses.

“Anytime we went anywhere I would really just hawk the different ways they would do woodworking,” he says.

In Africa, he recalled seeking out wood carvers and he marveled at their work. He would ask, “Can I see the black wood? Ebony, that’s what they were carving. They showed me the stumps.”

After the couple got back from a two-month missionary trip in Jamaica, “I wasn’t really sure what we were going to do. I got this one job from a contractor,” he recalls. “I ended up doing a ton of work in mahogany all through his house. I did his wine cellar, we did his office, a giant octagon ceiling in mahogany. That was one of my bigger projects that I took on, me and my wife as a helper.”

The client loved the work so much they ended up working on the entire house from the home theater to a giant bar. That was 15 years ago and the homeowner is still a client.

Some of his favorite work has been in the Japanese style. Another was making “a really beautiful dining room table” out of an expensive slab of European Elm that the client wanted. Recently, he posted on his Instagram page (@Reither_Woodworking) about a built-in vanity in a small nook that still managed to have useful, deep drawers.

Quality is important to him and he likes being in the shop working alongside the others. He cringes when he sees other companies’ work, he says. Reither’s business now has seven employees in total.

“It’s not your grandpa’s woodshop,” he says. “I like to train younger guys,” so he can teach them how he likes things done. “There’s 10 ways to skin a cat, but I say there is only one way to make money at it. You have to do things efficiently.”

When he outgrew the shop at his family home, he lucked out finding an old machine shop that belonged to a 100-year-old neighbor, just about a mile away in Aquebogue that the Town of Riverhead had grandfathered as a woodshop. He worked there for about two and a half years before the man passed away, and when his son wanted to sell, he ended up buying the property, including the house, where he and his wife are raising their family.

“I have a real easy commute,” Reither jokes.

The couple gutted the home and Reither used his talents to create a warm space with lots of custom cabinetry. A mud room located off the kitchen offers individual spaces for each family member, including their name on the drawers. The kitchen is truly customized, from a space for the Kitchen Aid mixer to the three drawers that open to reveal the individual words, “For my wife.”

“As you get older and you realize what it takes to run a family and the responsibility,” Reither says. Despite being forced to grow up fast, “Really I didn’t understand life until later on.”

Now 38, he often thinks about his father. “Just to have a conversation with him today would be a lot different than our conversations back then.”

No doubt, his father would be proud — of him and the work.