Matt Lauer Finally Sells His North Haven Estate, But For How Much? 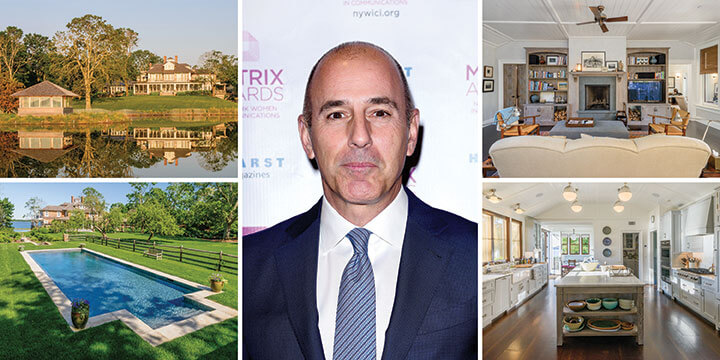 Former host of NBC’s TODAY Matt Lauer finally unloaded his waterfront Hamptons estate on North Haven and now we know how much he banked.

According to Suffolk County deed transfers available this week, Lauer sold the three parcels on Actors Colony Road for a combined $40.9 million — $4.4 million more than what he paid for the property six years ago.

Though looking for a buyer for the better part of the last three years, he put the 6.3-acre property back on the market, once again, last summer for $43.995 million. The Corcoran Group’s Susan Breitenbach, who had the listing, did not return requests for comment.

The buyer has not been named publicly and is shielded in the deed transfers by three limited liability companies using the numerical for the address plus the words, “Other Colony.”

Lauer and his now ex-wife, Annette Roque, bought the home from the actor Richard Gere in 2016 for $36.5 million, according to published reports at the time. At one time, Gere was asking $65 million.

Approximately two years after becoming embroiled in scandal, Lauer first put the estate on the market in June of 2019 for $44.8 million. It has gone on and off the market several times. In the fall of that same year, it was asking $43.99 million, and by September of 2020 it was listed at $43.995 million.

The final combined sale was $3.9 million less than he originally wanted.

The traditional shingle-style main house was built in 1902. The highly regarded construction firm Bulgin & Associates renovated the property to turn it into an energy-efficient 21st-century home while still maintaining original craftsmanship. Two guest houses on the property have also undergone a renovation. In total, there is about 14,000 square feet of living space, 12 bedrooms and 12 bathrooms.

The gated property offers sweeping views across Peconic Bay to Shelter Island’s Mashomack Preserve and includes 300 feet of direct bay frontage. There is a 240-foot-long private deep-water dock, not to mention a sandy spit of beach and a private waterfront pond with a bridge and an “island-inspired tea house,” according to the Corcoran listing.

A large kitchen with a barreled ceiling has an oversized center island with a connected informal living space and a breakfast room with a banquet.

There is plenty of space for entertaining, with several areas, both indoor and out, for guests to gather, including a formal living room and dining room. A screened-in porch runs the entire length of the house, and outside there is an exterior fireplace pavilion.

Set amid the manicured lawns and flowering gardens is a 60-foot heated pool, a gym in a separate structure with doors that open to let the fresh air in and a basketball court. Plus, there is still room for a tennis court.

Located just minutes to Sag Harbor, the North Haven peninsula has been a hotbed of activity in recent months. Boaters love the area because it’s a quick ride to some of the best fishing and best waterfront restaurants in the Shelter Island-Greenport area.

As for Lauer, we doubt he is leaving the Hamptons altogether. Both he and his ex-wife, with whom he shares three children, own another real estate in Sag Harbor and Water Mill.