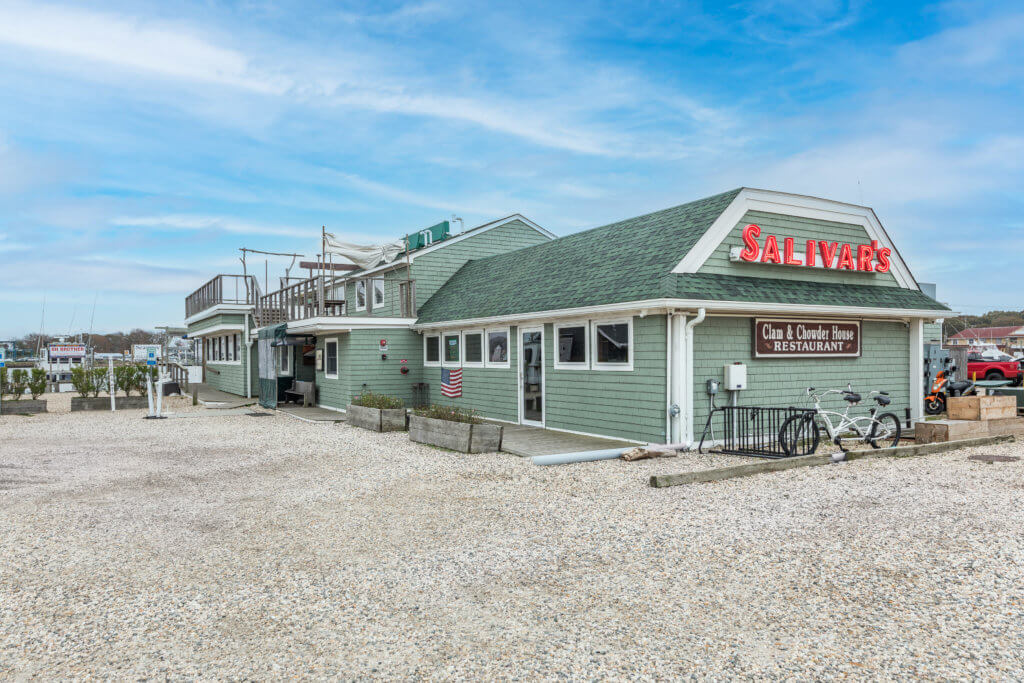 The building that houses Salivar’s, one of Montauk’s most established eateries—once a dockside hangout for fishermen turned trendy restaurant—has splashed onto the market, listing at $9 million.

The commercial waterfront property at 470 West Lake Drive houses one other prized possession—the head of the great white shark Captain Frank Mundus caught that inspired the character Quint in the movie Jaws.

The Montauk Harbor property, near Gosman’s Dock, offers the opportunity to own a restaurant facility with multiple indoor and outdoor dining spaces, while picking up prime Montauk real estate. “It’s been a staple in Montauk Harbor for my entire life,” says Chris Coleman of Compass, who listed the property five days ago. “It’s a really special and local spot”

For many years, it was the only place in Montauk where you could get a drink and food 24 hours a day, serving breakfast, lunch and dinner and with the neon sign that read Salivar’s always aglow.

The restaurant is asking nearly triple what it sold for nearly a decade ago. In 2011, Pete Chimpouckchis, the longtime proprietor of Salivar’s, sold the property for $3.3 million to Brian Obergfell, an attorney with a Wall Street firm, and his wife, Jo-Ann Obergfell. It had been listed at $3.95 million one year earlier. According to East Hampton Town tax rolls, the property is owned by Graceland III LLC, which the Obergfells formed in 2011. Rob Devlin and his family own the restaurant.

Located on a 0.83-acre lot, the restaurant includes a 4,100-square-foot first floor with two bars, a fully operable kitchen, three restrooms and two dining areas. There is also a 1,000-plus square-foot covered outdoor dining area with a separate bar that overlooks the commercial fishing boats docked in Montauk Harbor. The second floor consists of five rooms and a full bathroom, which has been used for staff housing or as an office/storage space. The upstairs deck and bar area also overlook the harbor.

The restaurant has more than 100 feet of water frontage and a bulkhead with five slips that can accommodate a boat up to 65 feet. It also has a sizable parking lot.

Even after the restaurant was renovated in 2014, the neon sign and an infamous great white remained. Mundus gave it to Chimpouckchis after he caught in 1964, and it was preserved by a taxidermist and mounted to the wall. “In fact, Chimpouckchis even raised the roof of Salivar’s in the space where the head was to be displayed, giving it a place of honor and in the process creating something of a shrine—one where people came in recent years to pay their respects to both the now-departed Mundus and a rapidly-changing Montauk…,” Long Island Pulse once wrote.

“If, as has been said, men like Frank Mundus put Montauk on the map, then Salivar’s stood as a temple to the Montauk they created,” the 2012 article continued. “The grinning shark head was the crucifix hung behind the altar of a very particular kind of church—the kind with Genesee Cream Ale on tap.”