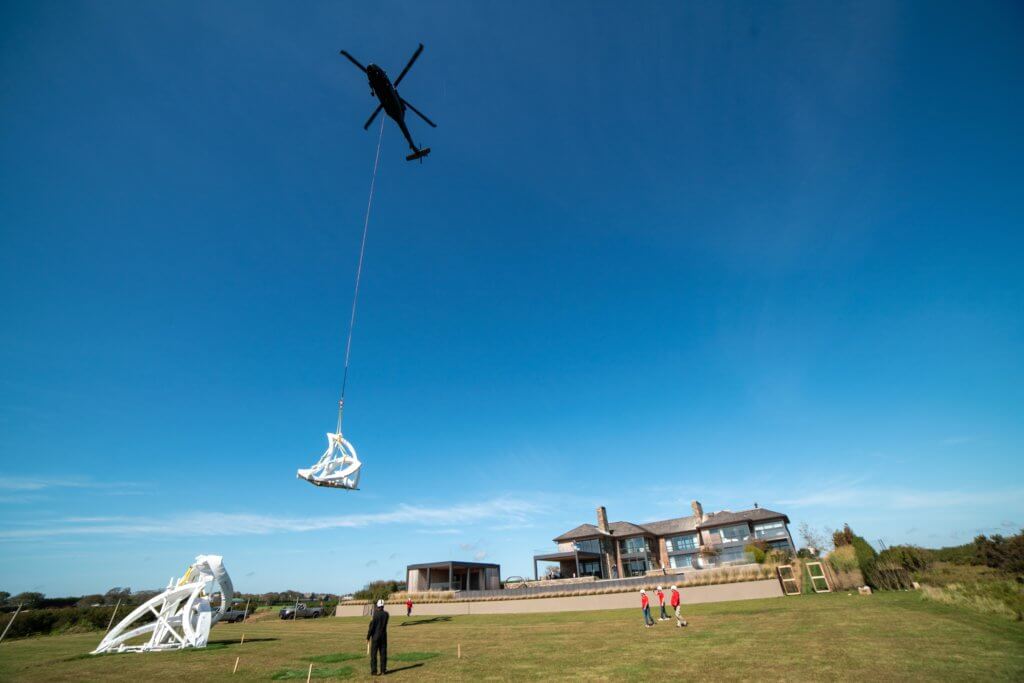 They say moving can be the most stressful time in someone’s life. Imagine moving valuable, heavy artwork — by air.

Earlier this month, two imposing outdoor sculptures by the French artist Stephane Guiran were relocated just a few miles from outside the owner’s property in Water Mill to his newly constructed estate in Southampton using a never-before-used method—a helicopter lift, according to Aetna Fine Art Logistics, which oversaw the move.

The company declined to provide the owner’s name or the addresses, but a map shows the art was moved from 178 Bay Lane in Water Mill to 91 Fowler Street, which was purchased under a limited liability corporation in May for $33.25 million through Bespoke Realty. The Bay Lane property also recently sold and was last listed at $15.950, also with Bespoke.

The sculptures are each 15 feet high and 20 by 20 feet wide, weighing in at 5,000 pounds a piece, the company said. Each sculpture took roughly 10 minutes to transport from Water Mill to Southampton.

Aetna Fine Art Logistics employed the unusual transport mechanism given accessibility restrictions at the destination in Southampton. Traditional rigging methods using cranes and trucks just would not do, Aetna said in a statement. The company explained that the destination was by a pond, adjacent to the ocean, with a very high water table and soft ground. The 13,000-square-foot Fowler Street house, built by Lifton Green in partnership with JBilasky Premiere Design + Development, is located on Philips Pond with views of the ocean.

“Our team of experts determined that the ground was not going to be able to hold the weight of the sculptures. So we established the need to pour underground concrete footings which would not be visible from the surface.”

The Federal Aviation Administration required the helicopter to fly the sculptures out over Mecox Bay to the open water at Flying Point Beach before returning inland to place them in their new location. After weeks of preparation and planning, the complex move went off without a hitch on October 15.

The free-flowing figures made of stainless steel could not be “dead-lifted from the top without deforming,” the company said in a statement. So Aetna designed a special bracing system to serve as a skeleton to maintain the integrity of the sculpture during lifting and the flight. “The rigging also had to be managed in ways to prevent causing stress to any particular area of the sculptures, especially at welded joints. The barycenter had to be very low and the straps had to bear a balanced weight distribution to prevent tilting or rotating during this unusual trip,” according to the statement.

Anyone who caught a glimpse of the flight had to be wondering what was dangling from the helicopter. And while Aetna did not disclose what the move cost, it is safe to say it was pricy.

“The fine art world is always challenging by definition,” Aetna said in a statement. “However, there are times when traditional and conventional approaches just don’t cut it.”